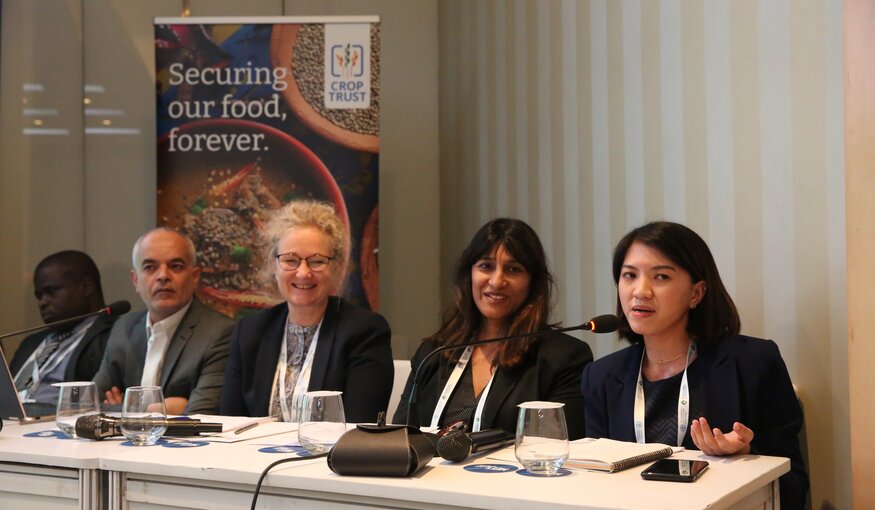 NEW DELHI, India (28 September 2022) – The Government of the United States of America has announced it is making a contribution to the Emergency Reserve, a funding mechanism established jointly by the Crop Trust and the International Treaty on Plant Genetic Resources for Food and Agriculture. The Emergency Reserve was initiated in 2021 to provide urgent support to threatened collections in the global system of ex situ conservation.

“We are delighted to announce a contribution from the United States of USD 150,000 to the Emergency Reserve,” said Christine Dawson, Head of the United States Delegation to the Ninth Session of the Governing Body of the International Treaty (GB9). “These collections are so incredibly valuable and yet there is so little provision for helping those that are at risk – even with the backup in Svalbard – and, in light of the tragic events in Ukraine, we at the Department of State believe this is the time to provide such funding.” The United States of America provides regular and generous contributions to the implementation of the International Treaty, through a wide range of channels.

The contribution was announced during GB9, which was convened from September 19 to 24 in India, where collections at risk were a recurring topic of concern.

“We live in an increasingly uncertain world, in which genebanks are confronted with new challenges every day,” said International Treaty Secretary Kent Nnadozie. “These challenges need innovative and urgent responses. The Secretariat of the International Treaty and the Crop Trust have responded to the call by the Eighth Session of the Governing Body to work together on programmatic matters in a variety of ways, including by taking joint strategic action in support of national programmes facing acute challenges.”

During the Governing Body session in New Delhi, the International Treaty and Crop Trust organized a side event, during which genebank representatives discussed the disparate challenges that have arisen unexpectedly in the past that have threatened their collections. Some talked about recent emergency situations caused by natural disasters, including Typhoon Xangsane (known locally as Typhoon Milenyo) in the Philippines and Cyclone Idai in Mozambique, Malawi and Zimbabwe. Likewise, present experiences in Yemen and Ukraine, which relate to threats by war and conflict, were also discussed.

The International Treaty and the Crop Trust are grateful for the latest contribution by the United States of America and earlier contributions made by the Governments of Norway and Italy.

“Unfortunately, genebank collections are not indestructible,” said Stefan Schmitz, Executive Director of the Crop Trust. “Natural disasters, political crises, pest and disease outbreaks and equipment failure can trigger catastrophic loss of the invaluable resources they conserve. When we lose this crop diversity, the foundation of our agriculture is diminished, as we lose the raw materials that can help us develop new varieties to withstand climate change and feed a growing world population. We encourage other governments and organizations to contribute to the Emergency Reserve, to provide rapid financial support to genebanks under imminent threat.”

About the Emergency Reserve

The Emergency Reserve responds to urgent requests from genebanks in low- and middle-income countries to prevent catastrophic loss of their collections. Managed jointly by the Crop Trust and the International Treaty on Plant Genetic Resources for Food and Agriculture, it came into being thanks to the generous funding initially provided by the governments of Italy and Norway.

About the Crop Trust

The Crop Trust is an international organization working to preserve crop diversity and thus protect global food and nutrition security. At the core of Crop Trust is an endowment fund dedicated to providing guaranteed long-term financial support to key genebanks worldwide. The Crop Trust supports the Svalbard Global Seed Vault and coordinates large-scale projects worldwide to secure crop diversity and make it available for use. The Crop Trust is recognized as an essential component of the funding strategy of the International Treaty on Plant Genetic Resources for Food and Agriculture. Learn more at www.croptrust.org.

The International Treaty on Plant Genetic Resources for Food and Agriculture is an international agreement between member countries to conserve, use and manage plant genetic resources for food and agriculture around the world for the benefit of people everywhere. The Treaty ensures that farmers and plant breeders access the raw genetic material needed to develop new crop varieties, including those with higher yields and those that are resilient to climate change. It provides a global solution to the challenges of crop diversity loss and climate change adaptation through mechanisms such as the Multilateral System and Benefit-sharing Fund.

Categories: For The Press, For Partners, Press Releases