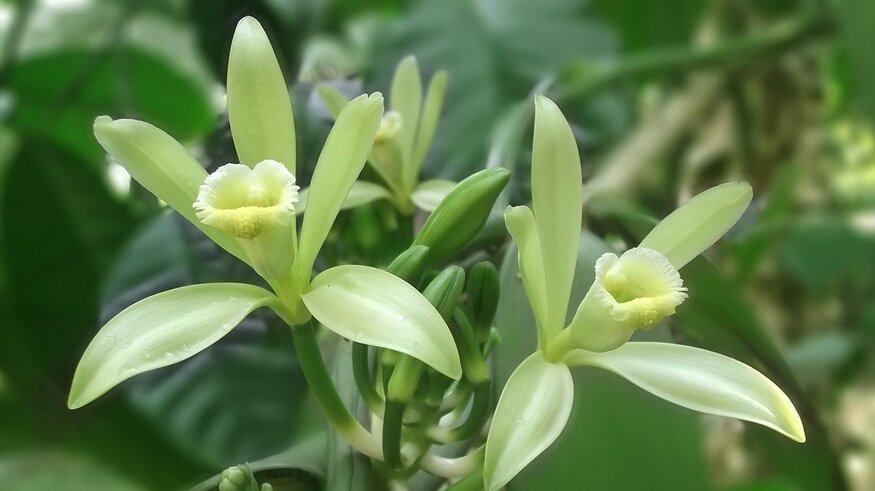 Baking enthusiasts everywhere love to talk about vanilla—what type they like, how they use it, and of course, its delicious flavor and aroma.

But the “real” vanilla is under threat.

Vanilla pods are the fruit of orchids in the Vanilla genus, the only group of orchids that produce an economically important fruit. The plant originates from Central and South America, where it was used by the ancient Mayans and Aztecs. It is still produced there, but at a declining rate.

Says Paula Bramel, the lead author of the global crop conservation strategy for vanilla, “Production has rapidly decreased owing to low market prices and the many constraints on traditional production systems.”

As part of the Crop Trust’s mission to safeguard crop diversity in perpetuity, key crops have been chosen for the development of comprehensive strategies to guide and coordinate global efforts for their conservation. Vanilla has been selected because it is an important, high-value crop.

Authored by the Crop Trust in collaboration with a group of independent experts from around the world, the new strategy draws on an in-depth review of the existing literature as well as a survey of 18 institutions that conserve vanilla. Funding to develop new strategies and update existing ones is provided by the German Federal Ministry of Food and Agriculture (BMEL).

Today, the main areas of vanilla cultivation are Madagascar, Indonesia, Papua New Guinea, India and Uganda. More than 95% of the world’s vanilla crop is derived from the species Vanilla planifolia, originally from Papantla, Mexico. The other 5% comes mainly from the hybrid Vanilla x tahitensis and Vanilla pompona.

Commercial vanilla vines tend to be cultivated from cuttings, meaning that subsequent plantings are genetically identical to the parent plant. This has resulted in a very narrow genetic base for the global vanilla crop, leaving it particularly vulnerable to pests and diseases, as well as changes in temperature and rainfall conditions resulting from climate change.

Vanilla’s wild relatives growing in natural forests in Central and South America are one important source of genetic diversity. There is an urgent need to protect these plants against habitat loss, and to preserve them in collections.

To date, however, more than 60 wild relatives of vanilla are not conserved in any genebanks.

Locally adapted crop plants growing in farmers’ fields are another important repository of vanilla genetic resources. Threats to these resources include pests and diseases, changes in environmental factors, changes in land-use (which are often market-driven), as well as other human-related disturbances, such as conflicts.

The conservation of wild relatives and the diversity of crop plants in farmers’ fields has huge implications for the global vanilla industry.

Bramel notes, “Production across Madagascar, Indonesia, Papua New Guinea, Uganda and other areas depends upon these genetic resources being conserved and used, so there is tremendous value associated with their conservation.”

Most formal vanilla collections consist of living vines. As such, they are easily threatened by environmental and human factors. “Unlike crops that can be stored as seeds, the conservation of vanilla is more complicated,” says Bramel. “It relies on maintaining live plants in the field or in a shade house. So, collections for conservation are often threatened by the same risks as crops in the field.”

In addition, limited funding for conservation means that there has been inadequate investment in infrastructure and training.

A high-value crop for farmers and forests alike

“As a high-value commodity, vanilla is an important source of income for smallholder farmers in tropical regions around the world and, indeed, for the economies of several developing countries,” says Bramel. “For example, in Madagascar, vanilla is grown by subsistence farmers in regions where it also contributes to the biodiversity of the forest. Cultivation of vanilla can reduce exploitation of forest resources and increase food security.”

Unfortunately, the current global system of conserving vanilla diversity suffers from numerous problems. To begin, vanilla conservation is poorly funded because it has not been considered as a priority for local and national governments.

Existing ex situ collections of vanilla diversity have large gaps; the collections are insecure and operations to manage them are inefficient. There are vulnerabilities in key routines and facilities, and a shortage of expert staff. There is a lack of quality management systems and research, and many collections are not backed-up.

However, there are also some advantages to the current system. There are several well established genebanks that can potentially act as key players in advancing vanilla conservation research, training staff, and advocacy. There are also national and private collections with good links to local farmers.

“The vanilla conservation strategy aims to build on the advantages of the current system and address its disadvantages,” says Peter Giovannini, Global Crop Conservation Strategies Project Coordinator at the Crop Trust. “The goal is to create a conservation system that is more secure, more representative of vanilla diversity, and more cost-effective, with better links between collections and users.”

The new strategy outlines the key priorities and actions needed to ensure that vanilla diversity can be sustainably conserved for future generations.

The first is to secure the long-term conservation of vanilla genetic resources. Specifically, it will be necessary to improve routine operations for growing and maintaining vanilla vines, duplicate existing collections, invest in conservation research, and protect the vanilla plants growing in farmers’ fields and in natural areas. Improving links between collections and users will increase engagement in conservation.

The second priority is to make it easier to share and exchange materials. This will require a good supply of disease-free materials for distribution, and policies to facilitate transport of vanilla seeds, cuttings and pollen.

The third priority is to improve the use of the conserved resources. The goal is to establish a comprehensive online database with specific information for each stored material. This database can be continuously updated with new information about genotype, disease resistance, and product quality. Access and use will be improved by establishing a global core collection that is available to researchers, farmers and industry, with appropriate benefit-sharing.

Acting together to save a precious spice

The strategy’s goals will also require greater communication and engagement among global stakeholders.

Therefore, the first action will be to hold a workshop so that collection managers, farmers, scientists, and industry representatives can discuss the preservation of the world’s vanilla genetic resources.

The second action will be to establish a dedicated international fund to conserve a core collection of vanilla resources. Funding will also help to support research aimed at breeding new varieties with improved resistance to extreme climate conditions, pests and diseases, and with different flavor and aroma profiles.

The third action will be to launch a global initiative for the long-term conservation of vanilla genetic resources in living collections, farmers’ fields, genebanks, and in protected areas where wild relatives naturally occur. This will involve prioritizing plant materials for conservation and sites for protection, and the development of early warning systems to prevent losses from farmers’ fields and natural areas.

Bramel concludes, “Only a truly collaborative global system for conserving vanilla genetic resources will allow us to enjoy the fruit of this valuable crop for decades or, hopefully, centuries to come."