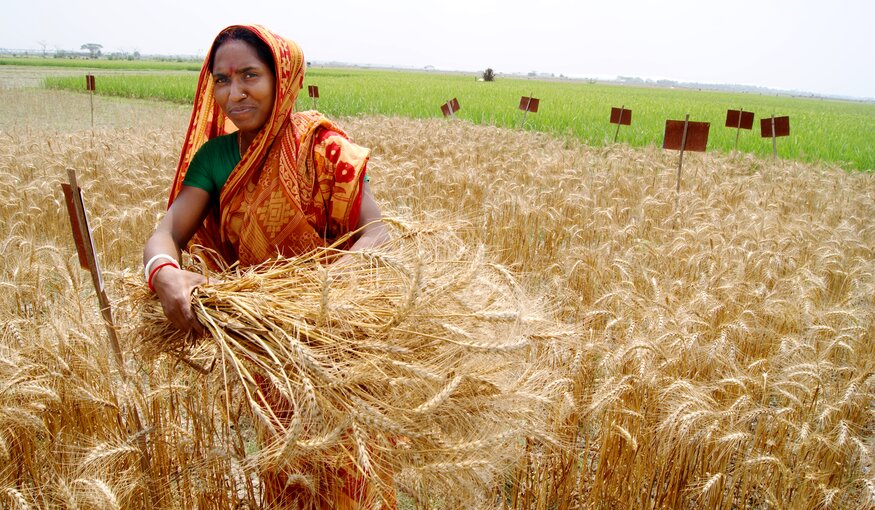 As one of the world’s major staple food crops, wheat is consumed by 35% of the human population, contributing almost 20% of dietary energy and protein to the diets of developing countries. Due to its significant role in ensuring food security, wheat is an ideal candidate for biofortification.

The largest numbers of people suffering from mineral and vitamin deficiencies live in South Asia and sub-Saharan Africa. Wheat is a widely- consumed food staple in South Asia, a close second to rice.Thanks to the pioneering activities of the late Nobel Peace Prize laureate Dr. Norman Borlaug in the 1950s, which led to the creation of the International Maize and Wheat Improvement Center (CIMMYT)in1966,Mexicohasserved as a hub to breed wheat for improved grain yield and disease resistance. Biofortification at CIMMYT has been undertaken through funding and collaboration with partners of the interdisciplinary HarvestPlus program, which was launched in 2003.

Breeding for enhanced zinc (Zn) concentrations was initially quite challenging, due to (i) the limited genetic variation for micronutrients in the adapted varieties and elite breeding germplasm and (ii) the complexity of genetic and metabolic networks controlling the equilibrium levels of Zn in wheat grain. In the early 2000s, scientists conducted large-scale screening for Zn content of wheat landraces (local, indigenous varieties)and wild relatives conserved in CIMMYT’s germplasm bank.[5] This rich genetic diversity has provided novel genes for the enhancement of Zn content in wheat grain (Box 1).

To date, four biofortified wheat varieties have been released – ‘Zincol 2016’ in Pakistan, ‘Zinc Shakti (Chitra)’, ‘WB02’ and ‘HPBW-01’ in India (Box 2). The now proven high bioavailability (% absorption) of Zn from wheat in human diets translates to significant nutritional impact. Nutrition trials with high Zn wheat have shown (i) an increase in Zn intake [8] and (ii) a reduction in child morbidity.[9] 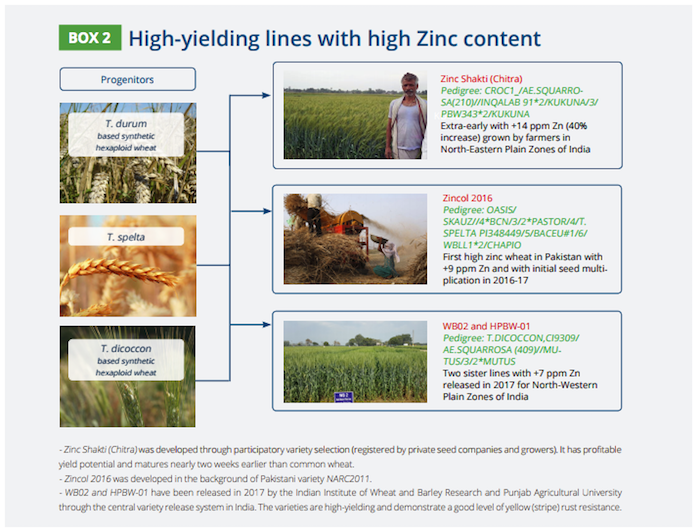 Expanding adoption of Zn wheat varieties in India and Pakistan is in the early stages and further testing and scaling out to other South Asian countries (Bangladesh, Nepal, and Afghanistan) and in Ethiopia is underway. [10] Over the next two decades, as mainstreaming of Zn in the CIMMYT wheat breeding program is implemented, and as additional high- yielding, Zn-rich varieties are released to farmers, it is expected that a large percentage of total wheat supplies in South Asia will be dense in Zn. The ratio of public health benefits to the costs of developing and deploying these varieties is estimated to be 100-to-1, if adoption rates of biofortified varieties reach at least 60% of total supply. [11]

Crop diversity contributes to a stable, sustainable, and diverse food production system and plays an important role in improving nutritional outcomes for the consumers. The CGIAR, in partnership with the Global Crop Diversity Trust (Crop Trust), is working towards ensuring the conservation and availability of plant diversity essential for food and agriculture, in perpetuity (Box 3).

Indeed, there is a genetic resource history behind every widely-grown crop cultivar, which has economic benefits that far exceed the costs of the collection and conservation of germplasm. [12] This progress described in improving the Zn content of wheat in high-yielding varieties is made possible by the genetic variation preserved in the CGIAR germplasm banks. 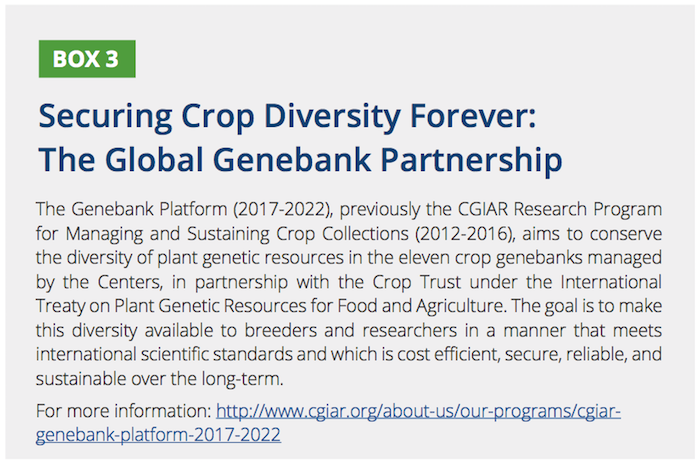 All forms of malnutrition are estimated to contribute to 45% of all child deaths in developing countries.[1] Importantly, more than two billion people do not get enough essential vitamins and minerals because their diets are not properly balanced. Consumption of staples is high so that the poor do not go hungry for the most part, but more nutritious foods, whose prices continue to rise significantly, are not affordable. Vitamin A, iron, and zinc deficiencies are the most widespread and serious. These deficiencies result in higher mortality and morbidity, reduced cognitive abilities, and lower work performance.

Through breeding staple foods that are both high-yielding and dense in minerals and vitamins -- a process known as biofortification -- HarvestPlus [2] and its partners seek to reduce “hidden hunger”. Biofortified varieties, developed through research at a central location, can be made available to multiple countries, and once released, are available in national food systems year after year at no additional cost to farmers and consumers.

[9] Sazawal, S. (personal communication). 2016. Zn-biofortified wheat decreases morbidity but does not modify serum zinc among preschool children and their mothers in a RCT in India.