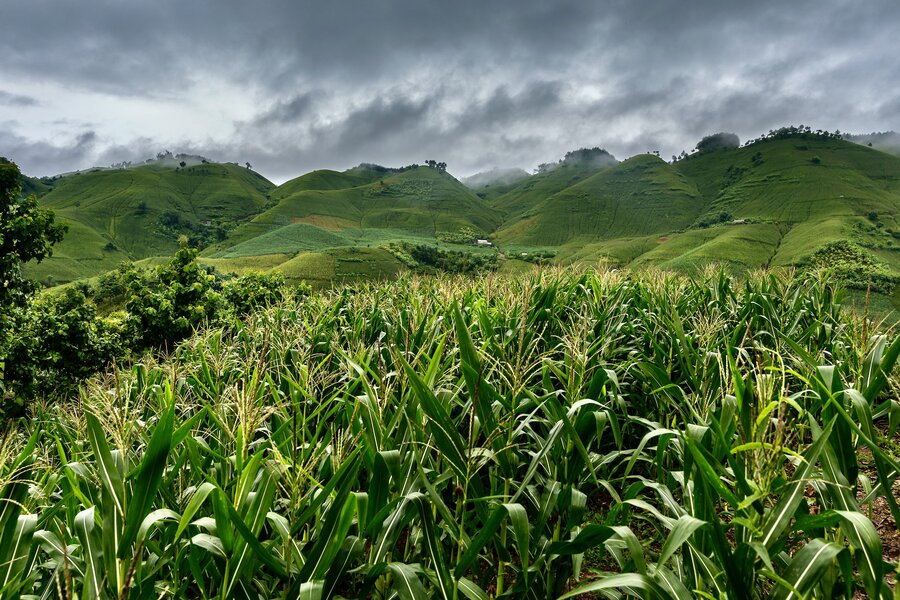 Maize (called corn in the United States, Canada, and Australia) is the most widely produced crop in the world. This cereal, which originated in Mexico, is now grown in at least 164 countries around the world with a total production of more than 1 billion metric tons in 2013.

There is tremendous diversity in maize, especially in its native continent. Maize is grown at latitudes varying from the equator to slightly above 50 degrees north and south, from sea level to over 3,000 meters elevation, in cool and hot climates, and with growing cycles ranging from 3 to 13 months. It is the genetic variability of maize that enables it to thrive in such diverse conditions.

Human consumption of maize and maize meal constitutes a staple food in many regions of the world, and it provides about one-third of the calorie intake in Latin America, the Caribbean and Sub-Saharan Africa. Maize meal is made into a thick porridge in many cultures: from the polenta of Italy and the mãmãligã of Romania to the food called sadza, nshima, ugali and mealie pap in Africa. It is the main ingredient for tortilla, tamale, posole, pinole and many other dishes of Mexican food, and for chicha, a fermented beverage of Central and South America. Sweet corn is a genetic variation, high in sugars and low in starch, that is served as a vegetable.

Most maize grown in the developed world is grown as feed for livestock, and much is also used for industrial purposes such as alcohol or syrup production. Sugar derived from maize is one of the main sweeteners in soft drinks. Increasingly ethanol made from maize is being used as an additive in petrol.

Maize is the preferred staple food of more than 1.2 billion people in Sub-Saharan Africa and Latin America. However, maize-based diets, particularly those of the very poor, often lack essential vitamins and minerals. Over 50 million people in these regions are vitamin A deficient, which can lead to visual impairments, blindness and increased child mortality. The white maize eaten in much of sub-Saharan Africa contains almost no pro-vitamin A, while standard yellow maize varieties contain about 2 micrograms per gram (µg/g) – still insufficient in a diet dominated by maize. The good news is that there is tremendous genetic variation in maize resulting in variable concentrations of pro-vitamin A. The project “Biofortified Maize for Improved Human Nutrition” at the International Center for Maize and Wheat Improvement (CIMMYT) has been screening maize samples, looking for the best pro-vitamin A content. Scientists anticipate producing materials with the ultimate target of 15 µg/g within the next four years by using cutting edge lab tools to help select the best materials for breeding.